The History of Methodism in Swanwick

The earliest records for Swanwick Wesleyan Church, on High Street, are the minutes of the church dated 1835. The first building was a retired butchers shop purchased for the sum of 10s. On this site, in 1846, the members built a permanent building, which forms the main worship area of the current church. The deed describes it as fronting the Alfreton/Matlock turnpike road which is today's High Street. The new chapel cost £262 and donations came from various subscribers in the surrounding area.
In 1847 the Ripley Circuit was formed with one of its founding churches being Swanwick Wesleyan Church. In 1850 the church members opted out of the Wesley Methodist Church and joined the United Methodist Free Church.

In 1875 the High Street gallery was added to the chapel for the choir and children. A new heating apparatus was installed and the chapel re-seated with forms made at Codnor. By this time church membership was 25 with 3 on trial and in 1885 membership had grown to 45.

Music in the church was provided in the early days by a harmonium. In 1910 a small pipe organ was installed; being replaced in 1916 by a larger pipe organ, which necessitated the strengthening of the High Street gallery. In the 1930s the church choir began to take part in festivals in the area and, under the leadership of Mr Fred Leivers, won several prizes over the years.

Over a period of 20 years the church bought several cottages adjoining it and had enough land to build a new Sunday school room in 1928. At the same time 120 blue tip-up cinema type seats were put in the church gaining it the nickname of "picture palace church." The Sunday school room had to make do with wooden benches. At this time a member of the church was Treasurer at the Butterley Company and he found a large pulpit in one of their stores that had actually been manufactured at Butterley for Pentrich Church. The pulpit was obtained and installed. The total cost of this redevelopment was £1,700 and the Ladies Guild was formed to raise much needed funds.

Sunday School was always very important in churches and the earliest known Anniversary was held in 1896. Sunday School was always run in the afternoons between the adult morning and evening services. The Sunday School Anniversaries were ‘big' days in all the Nonconformist chapels with huge congregations attending. In the early part of the 20th century and presumably at the end of the 19th century all the Sunday Schools paraded together round the village singing the special hymns chosen for the occasion. These big parades stopped around the 1930s when traffic in the village increased. However, the present Methodist Church continued parading until the 1980s when declining numbers and a change of minister with new ideas brought it to an end.

In 1932 the Deed of Union was signed between various branches of Methodism, including the United Methodist Church, the Primitive Methodists and the Wesleyan Methodists. All the different chapels, or Societies as they were known, established the Methodist Church in Britain of today. Members continued to worship in their own chapels until the 1950s and 1960s brought closures and amalgamations owing to falling membership numbers. Unfortunately a continuing process even today.
Membership at Swanwick Church, High Street had remained fairly constant mainly owing to transfers from closing churches; ie from Methodist Churches in Swanwick, Leabrooks, Jacksdale and Somercotes. It had a small boost in numbers during the early 1980s when Swanwick expanded with new housing developments.

In 1981 a new foyer was constructed onto the Derby Road side along with new inside toilets. A new central heating system was installed at the same time. The Derby Road entrance became the main front entrance. During the 1990s a toilet for the disabled was installed; a ramp for easy access to the front door, and a loop system for the hard of hearing. 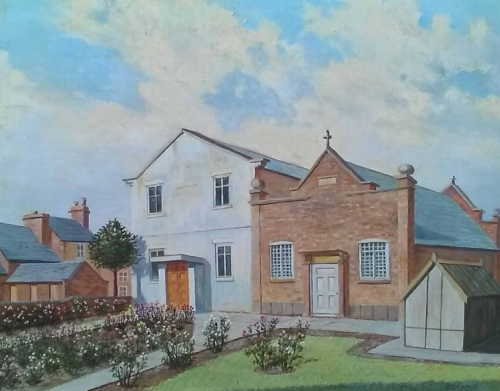 Junior Church in the 1980s and 1990s was run jointly by the Methodist and Anglican churches due to falling numbers of children and teachers. Parents brought their children to church for 10 minutes of the adult morning service and the children then left to go to their various classes at St Andrew's Old School House. Family services were held monthly so that children and adults could worship together. This was not popular by many older members of both churches who felt they were ‘losing' their children and eventually, with a change of minister, Junior Churches were again run separately.

Music in Church Services was always important. The choir no longer met every week but continued to come together to sing at the Church Anniversary in November and to present a Carol Service for Christmas. From the 1980s, during Family Services, a music group of singers, guitars, violin, flute, piano and percussion led the children with their songs. Drama and dance were sometimes also included particularly at the still popular Junior Church Anniversary in May.

A new century was celebrated by church members who decided to raise funds for a well in Africa. Many events were organised during the year 2000 by individuals; culminating in a ‘well dressing' (a tradition famous throughout north Derbyshire) that depicted the Tree of Life. This was so well received by Swanwick Villagers that to celebrate the Queen's Jubilee year in 2002, members were asked by Swanwick Parish Council to organise a ‘well dressing' for a newly erected replica well head. This was done jointly by the recently formed ‘Christians Together in Swanwick' group and has been undertaken by them every year since for the village's Well Dressing Event each May.

Junior Church membership numbers fell significantly so that by 2010 it had ceased to meet. Family services are still held at special times of the year when Rainbows and Brownies are invited to attend and parents and grandparents can bring their children.

From 2010 major renovations were undertaken to what had become an old building; a new roof, repointing, new central heating system and new electronic organ was installed. To accommodate a newly formed luncheon club and to meet stricter health and hygiene standards, a new kitchen was built at the side of church. The old dividing screens were replaced and the church was decorated throughout. To increase flexibility in the worship area the large pulpit was replaced with a more compact, movable, height adjustable pulpit was installed. To keep up-to-date with new technologies a new audio/visual system has been installed. Funds for the new projects have been raised from various places. Donations coming from Circuit and District Advance funds, church members, and various charitable trusts.

Major changes in the Methodist Connexion with regard to District and Circuit boundaries meant the breakup of the Ripley Circuit. This led to Swanwick, with 5 other churches in the northern half of the Circuit, joining with Ashfield, Clay Cross and South Normanton Circuits to form the Borders Mission Circuit in 2010.

Recently Christians Together in Swanwick (CTS) aligned itself with Churches Together in Britain and Ireland (CTBI). The CTBI work programme covers:

Swanwick Methodist Church has been working alongside the Baptist and St Andrew's churches as CTS for a number of years in the above areas and will continue to do so in the future.

Membership in the church is uncertain. While numbers continue to fall across the country, there are several housing development plans being submitted to the Planning Authority that could mean a rise in the overall population of the village and possible influx of new members to the church; as happened in the 1980s.

The future of Christianity in the country is uncertain but Swanwick Methodist Church continues to up-date itself to meet the needs of the community it serves; both locally in Swanwick and in the wider community of the Circuit. Of course our mission remains the same - "To know Christ and to make Christ known"

This week at church...
BBC News (Derbyshire)
Car lands on top of caravans after Glossop collision
'Drawing doodles for Ant and Dec was my dream job'
Mercian Regiment's annual pilgrimage to tower resumes
More...
Site Admin - please log in and re-save Setup to upgrade your weather widget - thank you.
More from OpenWeatherMap...